Centennial Academy Art Teacher Henry Blackmon displayed his artwork at the Georgia Capitol on Monday, February 13 as part of the first Black Family Day at the Capitol. The founder of Raising Empowered Voices Uplifting People Inc. (R.E.V. UP Inc.) selected Blackmon for the honor after she learned of his work through APEX Museum in Atlanta.

Blackmon was asked to showcase work that tied in Black History Month and Black Family Day at the Capitol. The purpose of Black Family Day was to celebrate African American achievements of the past, present and future. Mr. Blackmon used the event as an opportunity to help instill pride and greater knowledge of black history and the active roles African Americans have played in government and law. 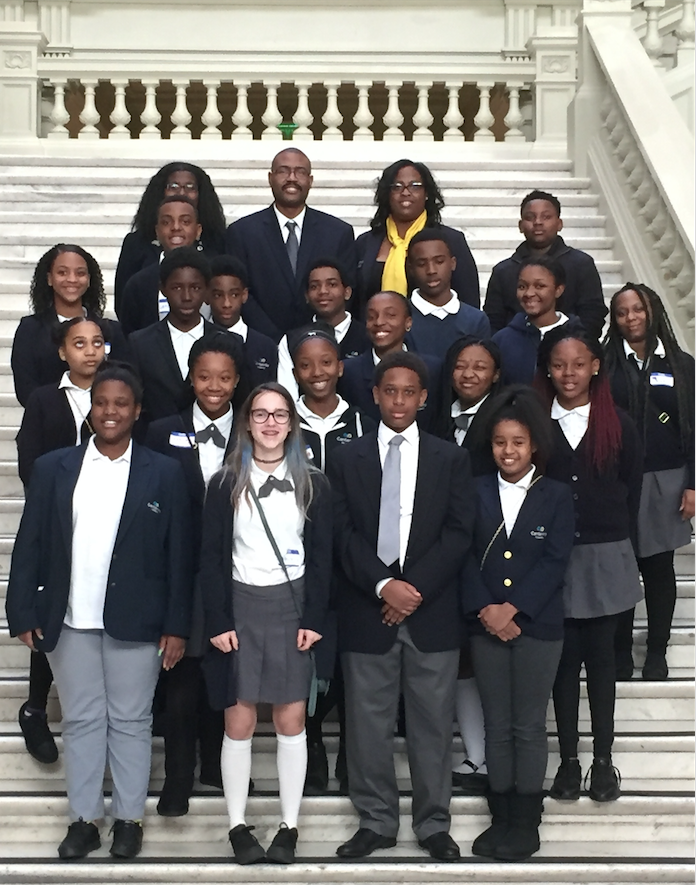 “For me it was an emotional experience being able to display my artwork in a building that my grandparents never got a chance to go in,” said Blackmon. “I proudly felt their presence throughout.”

Blackmon says the event was the perfect way for students to tie in their art knowledge with the areas of government and politics. He says it reinforces what they learn in his class. Blackmon teaches students about movements like the Harlem Renaissance to help them understand how art shapes and influences American history and culture. Students also met several state lawmakers and viewed historical artwork that hangs throughout Georgia’s Capitol.

“Overall the students of Centennial Academy were invigorated by the experience and very much look forward to making positive contributions throughout their communities both artistically and politically,” said Blackmon.

Blackmon has educated thousands of students in metro Atlanta for more than 20 years. He is a contemporary painter who specializes in oil, acrylic and watercolors. His artwork has been showcased in numerous places, including a juried exhibition celebrating the 50th anniversary of the Selma to Montgomery Voting Rights March at The National Center for the Study of Civil Rights and African-American Culture, APEX Museum in Atlanta, Fayetteville State University, Tubman Museum, LaGrange Art Museum, the Porter Sanford III Performing Arts & Community Center and Atlanta Athletic Club.