Congratulations to Keith Jackson for winning the Reach for the Stars (Teacher of the Year) Award. Jackson is a 4th grade teacher at Centennial Academy.

“It has been my esteemed pleasure to serve the Centennial family community,” said Jackson. “I am happy to know that I am able to make a difference and change the world one day at a time, one scholar at a time.”

Those who work with Jackson say the relationships he builds with students from day one have led to his success in the classroom. He works to make math, science, history and other curriculum relevant to students and their interests in order to engage them in the learning process. Jackson is a firm believer that all students can and will learn. 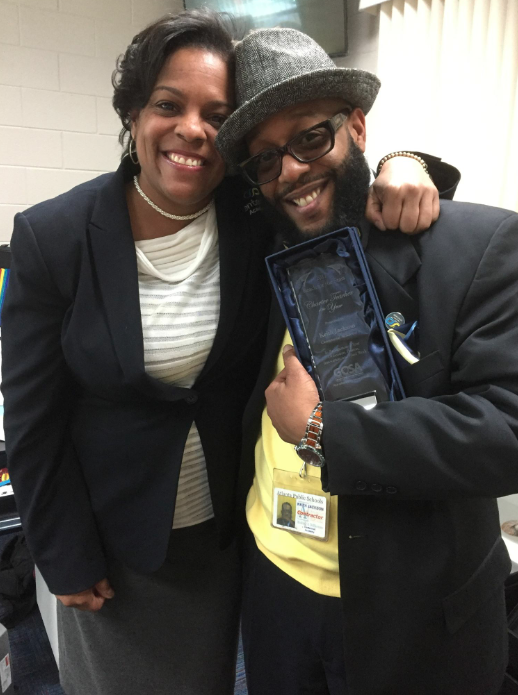 “It is no wonder to me that Mr. Jackson has been recognized as Teacher of the Year at this point in his career because he understands what makes teaching special,” said Centennial Academy Head of School Carol Santos. “He understands that everything he does as an educator influences a child’s entire life trajectory and not just the child’s performance at a point in time on a particular test.”

Jackson also uses assessments as an important tool to track student growth and design interventions. At the beginning of the year, his students are required to take reading and math assessments. Jackson uses data from the assessments to provided targeted instruction based on the individual needs of each student. Students in his class are also grouped into various learning centers to help those of all ability levels learn to their potential.

“Mr. Jackson has a great rapport with his scholars. He truly believes in them, which inspires them to believe in themselves and when you believe in yourself, you can accomplish great things,” said Centennial Middle Academy Academic Coordinator Ursula Borland.

Jackson also recognizes and reinforces positive student behavior and achievement. He helps motivate students to do their best through certificates, stickers, toy prizes, tickets, tokens and other reward systems. He also encourages them to move beyond the physical rewards and learn the important connection between positive behavior and the good feeling it produces.

Jackson holds a Master’s of Science and Education Administration from Purdue University and a Bachelor’s degree in Elementary Education from Howard University. In addition to his teaching career, Jackson previously worked as Reading Specialist/Title 1 Coordinator/District Testing Coordinator at Michigan Technical Academy and was Regional Vice-President of the Michigan Reading Association.